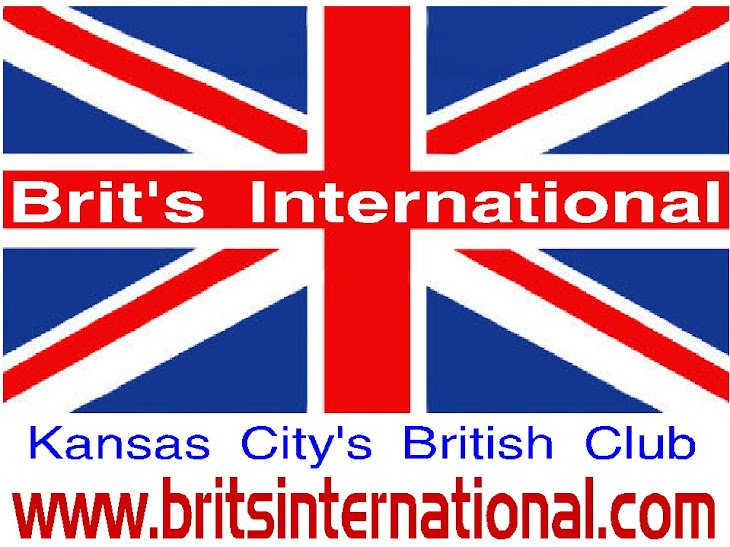 Since my last entry, a lot has happened with Brits International. Not only are we a much larger group standing at 300+ members as of today. I never thought we'd have so many within the group.

We now also have the annual British festival "British Gala". The first was on Saturday 28th April 2013 at the "Grace & Holy Trinity Cathedral" in downtown Kansas City. It's an extremely great looking building that is modeled on a church back in England. Read more about the cathedral at: http://www.ghtc-kc.org/

The first British Gala was a great success having more than 450 visitors. I, and various others never thought we'd see so many visitors on a first time venture. Brits, from Lawrence, Kansas had to send out for more supplies, and help as it got so busy.
All visitors had a choice of foods to munch on from a Cornish pasty lunch, or an afternoon tea from the Teahouse & Coffeepot of Kansas City, Missouri.

Various British vendors, and entertainment from great British magician "Terry Elton" of Shawnee, Kansas. Terry, and his magical partner were a great hit at the event. Check out Terry's website at: http://www.themagicofterryelton.com/

This year's British Gala (27th April 2013) saw fewer visitors due to the insistent rain on the day although you'd think the weather was perfect for a British event. However, those that turned out loved the event, and we saw many new faces this year. I find it quite amazing how many Brits there are in this part of the world.
This years British Gala saw some new vendors whom all enjoyed the event, and are planning on being at next years British Gala of which the date is already settled. Find out more about the event by clicking on the following link: www.britishgalakc.com
We're planning on having more British vendors at the next gala, and more entertainment. We still plan on having the St. Andrew's Highland dancers at the event next year as they are so great to watch. Click on the following link to see videos, and pictures of the dancers perform at the British Gala this year: http://www.britishgalakc.com/2013gala.html

Well, we have more great events planned for this year including a tour of a local privately owned vintage car museum which is scheduled for Saturday 18th May. If you'd like to join us for this tour then click on the following link to learn how to be a part of our group: http://www.britsinternational.com/join.html

Now that I've somewhat figured out how to get back into adding things to this blog, I hope to be able to get more added.

Thanks for your interest. 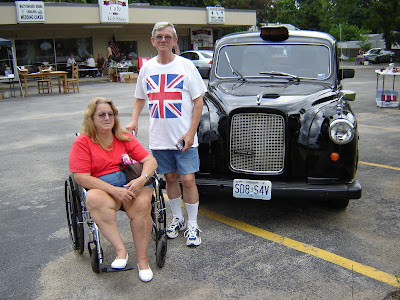 Well, we had our last Car Boot Sale on 19th June 2010 over at the Marbon Cafe in Kansas City, Missouri, and what a blowout it was.
An early start to a Saturday morning, and pretty warm at that time of the day already of about 80 degrees, but we all kicked on with it all.
Managed in the end to have about 15 sellers, so not bad a turnout for the location.

Finally got the new canopy up for the Brit's International display, and got all the sign up papers out.

Got the London Taxi all nicely lined up to hopefully attract visitors to the venue, but with another sale going on the opposite corner of the road it seemed a bit of a slow event.
Seems all the advertising that was done really didn't bring a whole lot of people top the event.

However, we made a few sales throughout the time there, so it wasn't a complete waste of time.

The two local British car groups didn't show up which is the second time that has happened, so I've no idea why they don't want to show up to a British event. Oh well, at least we had one British vehicle there.

Chris, and his wife Margaret formerly of Raytown, Missouri were in town from there home in South Carolina, and we had a great chat, and a few pictures taken by the taxi.

A lady, and her husband from England turned up whom we discovered actually grew up in my hometown of Wimbledon, SW London, and she grew up about a mile from me, so a definite surprise to find yet another Womble living right here in the area.
That makes 4 of us from Wimbledon that are living here in the Kansas City area that I've met.
Bloody amazing that we all meet out in the middle of the USA.

After all had left I popped in for a quick bite to eat, and drink at the cafe to cool down at the same time, and our resident pension broker shot in to say that I needed to move my stuff as a storm was coming in very quickly. He wasn't wrong because as I turned I saw things flying by, so i shot outside to hang onto the new canopy, then a couple of others turned to hold onto it too..
It was new, and I couldn't remember how to collapse the blasted thing, so now we had four blokes holding onto this thing in 60-70mph winds about to play Mary Poppins with it.
I'm sure if one of us would've let go we'd have been found surfing I-70 to St. Louis.
Whilst holding onto that I'm watching papers fly all over, and a brand new table I'd bought the day before take off, and then hit the ground. That was the end of that's use.

I've no idea where all these people came from, but all were placing stuff in the back of the truck, the taxi, and the trailer. Other vehicle's owners were racing all over as well although most were hidden around the side of the building.

At this time I hadn't realised that one of our newer members had turned up in the storm (Hayden). We don't often see him, and his wife, so after it had settled a wee bit I noted that next time he should warn us he's on the way with an entrance like that...

The wind quickly passed through although not quick enough for any of us I'm sure.

The temperature dropped 20 degrees, and it felt rather nice for awhile, but it quickly climbed back up to 90 degrees after that.

Anyhow, that was indeed a Blowout Sale that ended rather rapidly... I've still not cleared the back of the truck up with all the sales stuff in there, but it's having fun bustling around in there for now.

What an end to an event..... I know they say to stick around for a day in Missouri to see the weather change, but it
's getting to be a wee bit quicker at changing nowadays...

Hi All,
Well, it just amazes me how much we actually have here in Kansas City catering to the needs of the British community.
A few of us from the Brit club attended a grand opening of a new Tearoom/coffee place owned, and operated by a British bloke.
It was just on the off chance that we found this place, and very happy that we did.
The place is called The Teahouse & Coffeepot, and is at: 4309 Jefferson Street, Kansas City, MO 64111. Their website is: www.teahousekc.com

Pop along, and say Hi to Keith. If he's not in the tearoom, you'll probably find him next door at The Temple Slug shop which is also a family owned business.

As you can see in the picture above. The taxi made it out to the event, and is available for promotions around the area.

Pop along, and support this new British business.
Posted by Ray at 12:28 AM No comments:

I just wanted to wish you all a Happy, and safe New Year.

A few weeks ago I heard of the Best of British awards competition that was being held by the Telegraph newspaper in England.
They're trying to get the world's best: shop, pub, restaurant, social club, business club, and sporting club.

Brit's International has been nominated for the competition, and at present we're actually second in the voting.
However, to get in with a chance to win, we need your help.
It's very easy to go and vote. A quick signup of your name, email, and where you live. Then just activate your login details after receiving a message from the Telegraph, and you're on your way to voting for not only us, but all the other British places you like.
You can even nominate places that you like.

Whilst there's no monetary gain for the club, we will be noted as the world's best British social club.
That'll help us gain more members I'm sure, and you'll be part of the the club as well.

Click HERE to learn how to vote for us.

Cheers for popping by.
Posted by Ray at 5:18 PM No comments:

Brit's International was started on 2nd March 2005 for the local British community here in Kansas City, Missouri, USA.
We presently have around 100 members from not only the Kansas City area, but from around the USA, and from various areas of the world.

We meet all over the Kansas City area, and have lot's of fun at meetings with some great chats that can last for hours.

Come join us, and enjoy some great British people as well as various anglophiles.

Cheers for popping by
Ray